The basic idea behind the Elliott Wave Theory is that crowd psychology creates phases of market optimism and pessimism. The Elliott Wave Principle was discovered and formulated by Ralph Nelson Elliott.

Elliott Wave traders use the Elliott Wave Theory to understand these market price cycles or phases. They use this information to forecast trends and price patterns on the chart.

The market phases or waves are characterized by two factors: direction and speed. Price action can behave in the following ways:

The impulse and corrective phase can be both bullish and bearish. This means that there are four combinations possible:

Once the 5 waves and 3 wave patterns are completed on the one-time frame, then the sequence begins again on a higher time frame. 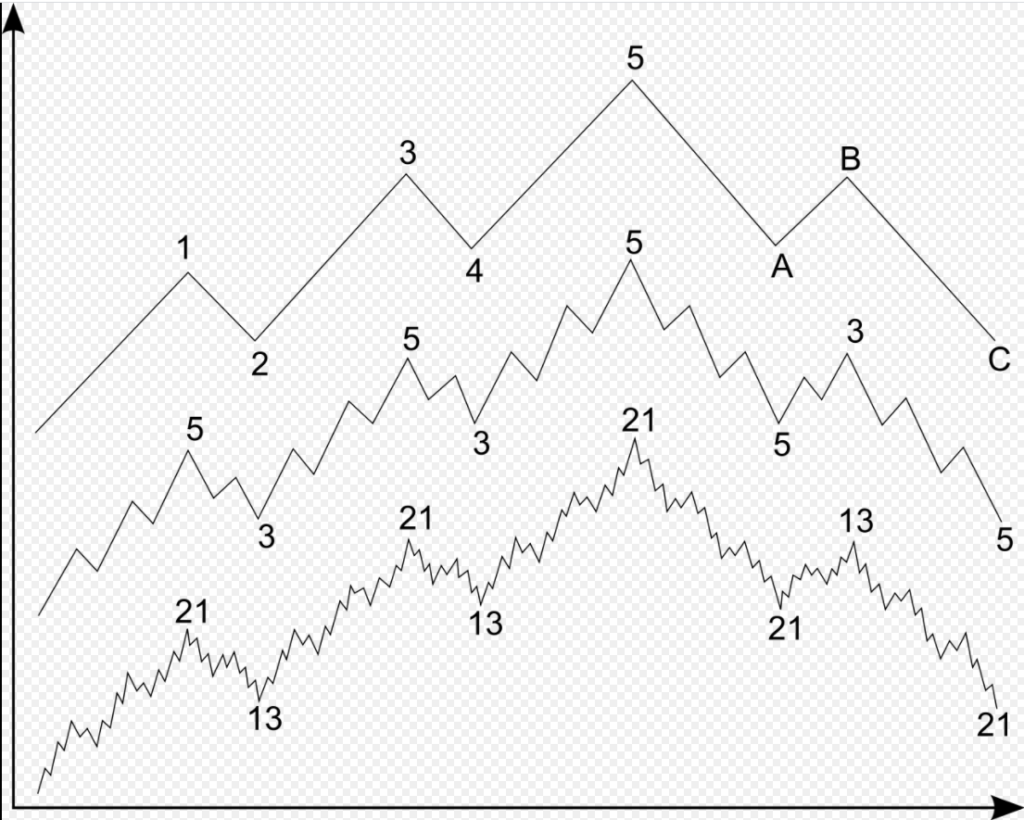 These wave patterns occur on all time frames, including lower and higher ones. Basically, these patterns self repeat on all degrees.

The classification of a wave can vary, but Elliott Wave analysts generally agree on these degrees (with approximate duration):

Let’s review the main rules and characteristics per wave.

There are dozens of guidelines but only 3 main rules. These guidelines and rules help Elliott Wave analysts make more accurate analyses, predictions, and decisions. The 3 main Elliott Wave rules are:

Waves 1 are often difficult to spot because they move against the prior trend. The previous trend is usually weak(er) and showing divergence patterns. Candlesticks patterns in the opposite direction can be another signal that the trend is reversing. Price action will break above the resistance trend lines, Fractals, and moving averages. On a lower time frame, five waves develop into the new trend direction. Usually, a strong impulse occurs in wave 3, which is a clear signal of the new trend. Sometimes a leading diagonal occurs if the new trend is slow to develop.

After a 5 wave pattern is completed in wave 1, a larger retracement takes place of the entire 5 waves. This is wave 2. For some traders who are not aware of Elliott Waves, this might still seem like the old trend is continuing. The correction unfolds in 3 waves: an ABC correction. Price action may not retrace the entire wave 1, otherwise, it becomes invalid. A deep retracement, however, is very common.

This wave sees the most enthusiasm. Wave 2 has confirmed a higher low or lower high. Now the bulls or bears are dominating the new trend and pushing price strongly in that direction. Price action is often the most impulsive in this wave. Wave 3 also moves a far distance in relation to the first wave 4. Often there are wave extensions in wave 3, which means that a wave 1, 3, or 5 is extended. Wave 3 may never be the shortest wave, otherwise, this Elliott Wave analysis becomes invalid. A wave 3 is always an impulse.

After the strong impulse in wave 3, a corrective pattern emerges. There is a retracement in the trend. A 3 wave ABC correction takes place. Often the wave 4 is shallow but complex and lengthy in time. Wave 4 may not retrace into the price territory of wave 1, otherwise, it becomes invalid. The exception is when a leading or ending diagonal is taking place in a larger wave 1 or wave 5. This may not occur in wave 3, which is always an impulse.

Once wave 4 is completed, one more final wave with the trend takes place. Wave 5 will be less impulsive than wave 3. This will create a divergence pattern between waves 3 and 5. Usually, wave 5 creates a new high but the break will be smaller. In some rare cases, wave 5 creates a double top (called truncated). For many, the trend may never seem to end but Elliott Wavers can spot the end easier. Candlestick patterns in the opposite direction or breaks through trend lines and moving averages could indicate the end of the trend.

Although there were 2 corrections in the 5 wave patterns (waves 2 and 4), now a larger ABC correction will take place on this time frame or degree. The divergence pattern created between waves 5 and 3 indicates the end of the trend. A push into the opposite direction should indicate wave A retracement. The character of wave A depends on the entire ABC correction. For instance, an ABC zigzag pattern indicates that waves A and C unfold in an impulse with 5 waves. But an ABCDE triangle chart pattern means that a wave A will unfold in an ABC.

Wave B is a difficult and dangerous wave for most traders. Why? Because of too many non-Elliott Wave traders, it seems like a trend continuation will take place. But the Elliott Wave trader is able to detect that the bounce with the trend is just short-lived. Price will reverse against the trend as soon as wave B is finished. This will trigger the start of wave C. Reversal chart patterns could play out like a double top or bottom, triple top or bottom, (inverted) head and shoulders pattern.

Once candlestick patterns confirm the end of wave B, then price action could be starting the 3rd part of the larger ABC correction. A wave C will often unfold in an impulsive 5 wave against the trend. But sometimes there is also a 3 wave pattern if the correction turns into a longer ABCDE triangle pattern. In an impulsive ABC “zigzag” correction, wave C will break the top or bottom of wave A. In an ABC “flat” correction, wave C will end around the same spot as wave A. In an ABCDE triangle, there will be several higher lows and lower highs and thus the price will not take a break. The main 12345 impulse wave and ABC correction have now been completed. Once the ABC correction is completed, the previous trend could continue on a higher time frame.

The Elliott Wave is closely connected to the Fibonacci levels. Both the waves and Fibs work very well together. Understanding Elliott Wave Fibonacci is a significant advantage.

Plus traders will benefit from using an Elliott Wave Fibonacci retracement strategy. For most traders, this is usually more effective than simply trading Elliott Waves without Fibonacci or Fibonacci without Elliott Waves.

What Did We Learn From This Elliott Wave Article?

Is The Elliott Wave Theory Accurate?

How Do You Count Waves In Elliott?

The Elliott Waves can be counted by using the Elliott Wave rules and guidelines. There are 3 main rules and dozens of guidelines. These guidelines and rules help Elliott Wave analysts make a more accurate analysis, predictions, and decisions. The 3 main Elliott Wave rules are A) wave 2 never retraces more than 100% of wave 1, B) wave 3 cannot be the shortest of the three impulse waves (waves 1, 3, and 5), and C) wave 4 does not overlap with the price territory of wave 1 – with the exception leading or ending diagonals. This article will also add a few Elliott Wave theory examples of guidelines: 1) waves often alternate SOI f a wave 2 retracement is deep, then wave 4 is often shallow, 2) waves 2 are often simple corrections while waves 4 are often complex corrections, 3) wave 3 almost always has the greatest volume, 4) if wave 1 is a leading diagonal, wave 3 is usually extended, and 5) expanding Flats are the most common type of flat correction.

How Many Waves Are There In Elliott Wave Theory?

There are eight main waves. The impulsive phase has 5 waves, named 12345. The corrective phase has 3 waves, named ABC. In the 5 wave pattern: waves 1, 3, and 5 are impulsive with the trend. Waves 2 and 4 are corrective against the trend. In the 3 wave pattern: waves A and C can be impulsive against the trend. Wave B is corrected with the trend. In waves 1, 3, and 5, there are another 5 sub-waves (15 waves in total). In waves 2 and 4, there are usually two sets of a 3 wave ABC correction (6 waves in total). So, in those 5 sub-waves, there are a total of 21 waves within those sub-waves.