Home :: Trading education :: Advanced Forex :: Learn How to Use the Fibonacci Tool

Learn How to Use the Fibonacci Tool

Fibonacci Tools Explained – What Are They?

The Fibonacci tool’s meaning varies from tool to tool. Each tool is used for different purposes, but generally speaking, the Fibonacci tools are used as a support and resistance. The levels can be used for breakouts, bounces, entries, stop losses, and targets.

The Fibonacci ratios are used for the Fibonacci retracement levels. The levels represent support or resistance levels.

Traders use the retracement levels for entries. They can also wait for candlestick patterns to emerge at the Fibonacci levels before entering setups.

Here is an overview of the basic key levels:

Here are other levels that some traders use:

Plus the Fibonacci retracement tools can also be used for adding targets. In that case, traders need to add minus values to their Fibonacci tool (see the FAQ at the bottom of this article how to add levels):

The Fibonacci expansion tool is used for determining targets. Traders can find the levels by placing the Fibonacci tool on a start and endpoint. But they add a third point, which is the place where price action bounced.

Once a trader has these 3 points, the Fibonacci expansion tool plots the targets on the charts. The main target levels are these:

The Fibonacci retracement tool and the Fibonacci expansion tool are the most used ones in the world of trading. These are the real Fibonacci trader tools. That said, let’s review the other three Fibonacci tools that every MT4 platform offers.

These three Fibonacci tools trading all have different purposes. Let’s review all of them one by one.

These trend lines offer support and resistance zones, just like the Fibonacci retracement levels. The main difference is that the Fibonacci fans have levels with a fixed angle rather than horizontal levels.

Fibonacci arcs are even more dynamic than Fibonacci fan levels. Fan levels are semi-dynamic because the trend lines do have an angle. But the angle is fixed and will increase or decrease at the same rate for each candlestick or bar.

The Fibonacci arcs, however, are even more dynamic because the lines are moving at a curve. This means that the rate of change is not equal, like with the Fibonacci fan. Rather the angle of the trend lines changes over time. The angle becomes steeper over time.

Fibonacci arcs are half-circles, but sometimes traders can also see full circles as well. The Fibonacci arc is based on a start and endpoint using a price swing or candlestick. 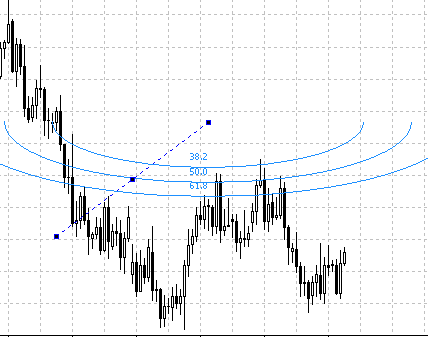 The Fibonacci time zone is the only one that is different: it indicates timing via vertical lines.

Traders also use two price points: a start and endpoint. A price swing is often the most logical way for placing the Fibonacci time zones.

The Fibonacci time zones are moments when price action might end a cycle or price swing. It indicates a potential timing of a change. Of course, these levels are just rough indications and confirmation of your analysis is always needed.

What Did We Learn From This Fibonacci Tool Article?

The Fibonacci retracement tool offers static support and resistance levels when a trend is available on a price chart. The levels are based on Fibonacci ratios. The retracement levels indicate where the retracement might end and the trend could continue.

The Fibonacci extension tools also offer static support and resistance levels. But the tools do not show retracements but rather targets.

How Is Fibonacci Used In Trading?

How Do You Use Fibonacci Tools?

The Fibonacci retracement tool is used in MT4 by clicking on insert at the top of the platform. Then click on Fibonacci and retracement. Then traders need to click on the start point on their chart, keep holding the left mouse button, and only release the mouse button when they have reached the endpoint. Many traders start left and draw to the right. They start low and end high for bullish price swings and start high and end low for bearish price swings. But there are also traders that use the opposite logic. You can always edit the location of the Fibonacci tool by double-clicking on the left mouse button and then moving the start or endpoint. You can also delete the Fibonacci tool or edit its properties by right-clicking on the start or endpoint.

What Are Fibonacci Tools?