Home :: Trading education :: Forex Terms :: What Is Pip In Forex?

What Is Pip In Forex?

Understanding Forex Pips – What Are They? 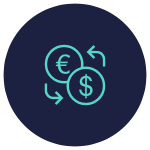 Forex pips represent the price movement of a specific currency pair at a minimum level. Pip is a measurement of the movement of the value of one currency compared to another one. Usually, pip is referred to as the fourth number after the decimal point (0.0001). Although, there are some cases when the pip is defined as the second number after the decimal (0.01). An excellent example of this is the USD/JPY currency pair. Generally, this is because the price changes are way more significant in this currency pair than other ones.

The most important type of Forex trading pip is Nano pip, the same as the pipette. While a pip represents the movement of the fourth number in the decimal point, the pipette shows how the fifth number moves. So this means that the Nano pip is a more thorough measurement of the movements in the values of the currency pairs.

However, it should be noted that Nano pips meaning in Forex is a little different when trading with the JPY currency pairs. To measure the pipettes, traders must look at the currency price changes in the third number after the decimal point.

While trying to understand Forex pips, it is essential to know how to calculate them. An investor should know the pip formula for evaluating its value: Pip Value = Contract Size x One Pip.

We all know that nobody trades without some level of leverage. So even though it may seem traders are calculating the movement of 1/1000th of a cent, they are calculating changes that are worth thousands of dollars. So this is why pips calculation in Forex is an essential process. There are various trading calculators that help investors to measure the precise pip value in Forex at the given time.

What Did We Learn From This Forex Pip Article?

The pipette is a more detailed evaluation of the changes in the currency pairs prices and it shows how the fifth number moves after the decimal point.

There is a pip formula for evaluating its value: Pip Value = Contract Size x One Pip.

The pip is defined as the second number after the decimal when it comes to the currencies paired with JPY.

What Is Pip In Forex Trading?

Pip (Percentage in Point) is an important term in the foreign exchange market which represents the price changes of the smallest changes in the currency pairs. Pips in Forex trading are a measurement of the movement of the value of one currency compared to another one. Usually, pip is referred to as the fourth number after the decimal point (0.0001). However, there are some cases when the pip is represented as the second number after the decimal.

How Much Is A Pip Worth In Forex Trading?

Knowing the pip value depends on the lot size. If one is trading with USD pairs, the pip value will be $10 in a standard lot, $1 in a mini lot, and $0.10 in the case of a micro lot. Besides, there is a specific formula for measuring the pip value, which is the following: Pip Value = Lot Size x One Pip.

How Do Pips Work In Forex?

The Forex trading pips show the movement of a very small number in currency prices which might be worthy 1/1000th of a cent. However, they actually are the measurements of the changes that are worth thousands of dollars. The overall pip value shows whether the trader managed to gain profits or losses from trading with the specific currency pairs.