Home :: Education articles :: Forex Terms :: What Is Spread In Forex?

What Is Spread In Forex?

Understanding Spread In Forex – What Is It?

Forex lot size meaning: Spread is the difference between the selling and buying prices of an asset. 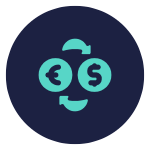 Spread is one of the key terms in the Forex market. Forex spread meaning is quite simple. It represents the difference between the selling and buying prices of particular currencies. Usually, the Forex spread is how the broker companies make money. Most traders look for small spreads wherever possible, because it then leads to less payments “in commission” and higher profits in the end.

There are different types of spreads in the Forex market including floating spreads, fixed spreads, Yield spreads and Negative spreads. They have different characteristics so every trader should understand the main idea behind each of them before they start their trading.

Fixed is a Forex trading spread which stays the same no matter what happens to the market. It is incredibly advantageous for traders who want to know exactly how much they will be charged based on every trade that they make.

Floating spreads are the exact opposite. They change based on what happens in the market. For example, if the liquidity of a particular currency pair goes down, then the spread may increase as the broker has to “do more” in order to verify trades. Floating spread is mostly used by traders who hope for a lower option when placing trades with exotic currency pairs.

Negative spreads mean that the trader is not charged for trading at all. In fact, they may actually be paid by the broker. Governments sometimes reward brokers for massively trading their currencies, which is why the broker wants to make them as attractive as possible to its users.

What Did We Learn From This Spreads In Forex Guide?

We learned that Forex spread meaning represents the difference between the selling and buying price of particular currencies.

There are different types of spreads in the Forex market including floating spreads, fixed spreads, Yield spreads, and Negative spreads.

Floating spreads can change based on exchange rate movements in the FX market.

Yield spreads are used to calculate the spread rate in percentage instead of pips.

Negative spreads are very rare and only happen when governments encourage currency trading.

What Is A Good Spread In Forex?

A good spread is usually equal or below 1 pip. Most brokers are rated by their spreads on major currency pairs like EUR/USD. If the spread for this currency pair is above 1 pip, then it’s not very advantageous for the traders.

How Is The Forex Spread Calculated?

Let’s suppose a trader selected EUR/JPY currency pairs. For example, the JPY value is 1.1532 times the USD at the moment. The asking price is 1.1534- this is the currency price that the traders are charged. Besides, the price that the seller sets is 1.530. So the difference between the ask and bid price, the same as the Spread, equals 0.0004 in this case.

What Does Spread Mean In Trading?

Forex spread represents the difference between the selling price and the buying price of specific currencies. They are also referred to as the bid and ask price. Usually, the Forex spread is how the broker companies make money.